The Experimental Characterization of Hydrogen-Material Interactions

We take a more detailed look at the summer school on the experimental characterization of hydrogen-material interactions that we co-organized with the University of Salford, prior to MH 2014, earlier this year. 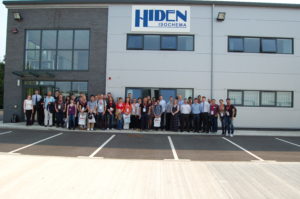 The school was a great success and was attended by 39 students from institutions in 15 different countries, with 16 different nationalities represented. The four day program included two days of lectures, a day of practical demonstrations and an excursion to the Lake District National Park.

The summer school began with a day of introductory lectures at the University of Salford buildings at MediaCity UK in Manchester, which was chaired by Dr Martin Owen Jones from the ISIS neutron source at the Rutherford Appleton Laboratory in the UK, one of the co-organizers.

Professor Andreas Züttel from EPFL and EMPA in Switzerland, began with two talks entitled “Introduction to Hydrogen in Materials: Fundamentals and Applications” and “Hydrogen in Metals and Metal Hydrides“.

In the first of these, Professor Züttel introduced the study of hydrogen in materials, beginning with the discovery of hydrogen and its naming by Lavoisier in the 1700s. The fundamental properties of hydrogen and its isotopes, the interaction of H2 with materials and the use of hydrogen as an energy carrier were all discussed in some detail. The second talk focused on the interaction of hydrogen with metal hydrides, including the original discovery by Thomas Graham of the absorption of hydrogen by Pd in the 1860s. Professor Züttel described phase diagrams, the thermodynamics of hydride formation, including heats of solution and van ‘t Hoff plots, and the effects of hydrogen absorption on the electronic structure of metals. Empirical and semi-empirical models for the stability of metal hydrides were covered, together with the different families of hydride-forming intermetallics.

These first two talks proved to be a great start to proceedings.

Following on from Professor Züttel, Dr Paul Anderson from the University of Birmingham in the UK, another co-organizer, presented a chemist’s perspective on complex hydrides.

In his talk, Dr Anderson discussed the requirements for reversibility in these materials, and the interplay between thermodynamics and kinetics, using a number of different materials as case studies.

After lunch, the topics of the talks moved on to the physisorption of molecular hydrogen. Dr Theodore Steriotis from NCSR “Demokritos” in Greece began with “Hydrogen in Porous Solids and Inclusion Compounds“.

Dr Steriotis’ talk started with an introduction to the nature of intermolecular interactions, a crucial aspect of the adsorption process, and the importance of factors such as pore size and the surface chemistry of nanoporous adsorbents. In the latter part, a range of adsorbents were introduced and categorised as organized/non-organized and amorphous/crystalline materials. These included zeolites, activated carbons, templated carbons, carbide-derived carbons (CDCs) and metal-organic frameworks (MOFs). Finally, Dr Steriotis concluded by considering clathrates, a type of inclusion compound that has been studied recently for hydrogen storage applications.

The next contribution came from Dr Nuno Bimbo, from the University of Bath in the UK, with a presentation entitled “Quantifying Hydrogen Uptake by Porous Materials“.

This talk focused on the experimental characterization of the hydrogen adsorption behavior of porous adsorbents and methods for modeling adsorption isotherms at elevated hydrogen pressures. Dr Bimbo covered concepts relevant to molecular H2 physisorption, such as the definitions of excess and absolute adsorption, and introduced a model for the absolute, together with its use for comparing the storage capabilities of adsorbents versus hydrogen compression. Dr Bimbo concluded his presentation by considering different approaches to the determination of the isosteric enthalpy of adsorption.

To round off a very interesting day of lectures, the Chairman, Dr Martin Owen Jones concluded proceedings with a talk entitled “Characterizing the Structure, Kinetics and Thermodynamics of Hydrides“.

Dr Jones began his presentation by discussing the search for hydrogen storage materials and introducing their thermodynamics and the kinetics of the hydrogen sorption process. Macroscopic characterization techniques, including the volumetric and gravimetric methods and Differential Scanning Calorimetry (DSC), were then covered, together with the modification of thermodynamics by nanosizing.

In the evening, Simon Steel from the University of Salford led an introductory tour of Manchester city centre. This ended in a popular area known as the Northern Quarter (more specifically, in Dry Bar, which was opened in 1989 by Factory Records and the great Manchester band New Order).

The second day took place here at Hiden Isochema – we’re based in Warrington, which is about 30 km west of Manchester. The summer school students were brought over here in the morning by coach from MediaCity UK.

These two complementary presentations addressed the main macroscopic methods for the determination of hydrogen uptake by materials from a practical perspective and covered many of the issues that can affect these measurements.

The rest of the day was then spent on practical demonstrations of the measurement of hydrogen sorption using a number of different instruments. This allowed further discussion of the important considerations for the performance of accurate hydrogen sorption measurements. The students were split into groups and spent half an hour on each station.

In addition to the practical demonstrations here at Hiden Isochema, the students also visited Hiden Analytical, our parent company. One of the groups is shown in the photo below being introduced to a Secondary Ion Mass Spectrometry (SIMS) surface analysis system by Dr Graham Cooke.

After returning to Manchester at the end of the day, the students met in a pub and restaurant called The Wharf, in the historic area of Castlefield for an informal dinner (and some real ale, an English speciality).

Following the rather intensive day at Hiden Isochema, the students were then able to take a break from the scientific program and enjoyed a one day excursion to the picturesque village of Grasmere in the Lake District National Park, which is famous for being the home (from 1799 to 1808) of William Wordsworth, one of the best known of England’s Romantic Poets.

The summer school then returned to MediaCity UK for the final day, which was chaired by Dr Dan Bull from the University of Salford. This featured a series of lectures by invited speakers who each specialize in different microscopic characterization techniques, including Inelastic Neutron Scattering (INS), powder diffraction, and Nuclear Magnetic Resonance (NMR), Raman and Infrared (IR) spectroscopies.

Dr Sabrina Sartori, from the University of Oslo/UNIK and the Institute for Energy Technology in Norway began the day with a talk entitled “Introduction to Spectroscopic Studies of Hydrogen in Materials“.

This provided an excellent start by covering a variety of microscopic techniques and the principles behind them. Dr Sartori covered neutron scattering methods, including both elastic and inelastic scattering, the properties of neutrons, and a comparison with X-rays. The talk also included consideration of the use of different techniques to cover different length scales, which led nicely into a description of the use of small angle scattering to probe materials over longer length scales and case studies of the use of this approach to study nanoconfined borohydrides for hydrogen storage applications, a topic of significant current interest.

In addition, Dr Sartori also kindly stood in for Professor Yaroslav Filinchuk, who unfortunately had to cancel at the last moment due to visa delays. Rather than deliver a second lecture, however, Dr Sartori presented the students with a challenge to work on in groups. This worked very well and, following a short preparation period, the groups made a series of excellent presentations, focused on different materials-related problems and their potential solutions.

Dr Timmy Ramirez-Cuesta, Chemical Spectroscopy Group Leader at Oak Ridge National Laboratory (ORNL) in the US, then gave the first of his two presentations, which was entitled “Studying Gas Adsorption in Porous Materials and Surfaces with INS“.

In his talk, Dr Ramirez-Cuesta began by introducing ORNL, the use of neutron scattering, in-situ pressure cells and the properties of H2. He then used a series of practical examples to illustrate the study of hydrogen adsorption in porous materials, including H2 adsorption in a series of zeolites, in a Cu-containing MOF and in NOTT-300.

After lunch, Dr Andreas Borgschulte from EMPA in Switzerland then spoke on “Raman and Infrared Spectroscopy Studies of Metal Hydrides“.

This presentation began with the fundamentals of these methods, including Maxwell’s equations and consideration of photon-matter interactions. A practical example of the use of infrared (IR) spectroscopy to study the decomposition of borohydrides was then followed by an introduction to the Raman effect, and the basics of group theory and its use in the derivation of selection rules for both IR and Raman spectroscopy. Dr Borgschulte then provided some further practical examples, including the study of yttrium hydride, and both NaBH4 and LiBH4.

A presentation by Professor Mark Conradi of Washington University in the US then followed “Uses of Nuclear Magnetic Resonance (NMR) in Metal Hydrides and Deuterides“.

Professor Conradi began by introducing the different types of information that can be obtained from NMR, before covering nuclear spin relaxation to determine rates of hydrogen motion, Pulsed Field Gradient (PFG) NMR to measure diffusion, and Magic-Angle Spinning (MAS) NMR to probe local structure. In each case, practical examples from the literature, including studies on ZrHx, YD2+x, MgH2, ZrNiDx, TaV2Hx, LaNi5H6, and various borohydrides, were used to illustrate the application of the different types of NMR to different hydrides and deuterides.

The day concluded with a second talk from Dr Timmy Ramirez-Cuesta entitled “Comparing Theory with Experiment: Some Spectroscopic Case Studies“.

The presentation covered the modeling of INS spectra using first principles (ab initio) calculations. Dr Ramirez-Cuesta covered the modes of vibration in hydrides and the behavior that leads to peaks in their INS spectra, before introducing Density Functional Theory (DFT) using different approximations for the exchange-correlation functionals, such as the Local Density Approximation (LDA) and Generalized Gradient Approximation (GGA). The description of lattice dynamics using the quasiharmonic approximation was discussed, with a number of practical examples provided throughout the talk, including the study of a number of binary hydrides, but also the investigation of lattice flexibility in the metal-organic framework MIL-53.

At 5pm, Dr Bull concluded the day of talks and the students made their way over to The Lowry to register for the main MH2014 conference.

The feedback we’ve received so far has been very positive and we very much hope that the students both enjoyed and benefited from the varied program that was on offer. Although it wasn’t possible to cover any of the topics mentioned above in great detail, we hope that each of the talks, together with the practical demonstrations here at our headquarters on the Friday, gave the students a good overview of the kind of information that can be obtained from the different characterization techniques, and perhaps gave them ideas that they will be able to apply to their own research in the future.

We would finally like to thank Clare Forster and Vicky Beckett of the University of Salford Conference Office for their help with the organization of this event.

Some of the presentations mentioned above can be downloaded as pdfs from the MH2014 conference website MH 2014 Summer School Presentations.

If you have any questions regarding any of the above or would like to visit us here in Warrington yourself, then please do not hesitate to contact us.

You Might Also Like
The next webinar from the RSC Porous Materials group, sponsored by Hiden Isochema, will be presented by Sofía Calero, of Eindhoven University of Technology.
The first stand-alone UK MOF symposium will be held from 9th – 10th April 2018 at the University of Southampton.