Hiden Isochema was a proud sponsor of the 1st International Gas Adsorption Summer School (I-GASS), which was held on the Greek island of Spetses from the 9th to the 13th September 2019.

The school attracted approximately 40 students, from as far afield as Australia and Canada, and featured a five day programme of talks and tutorials on various aspects of gas adsorption. 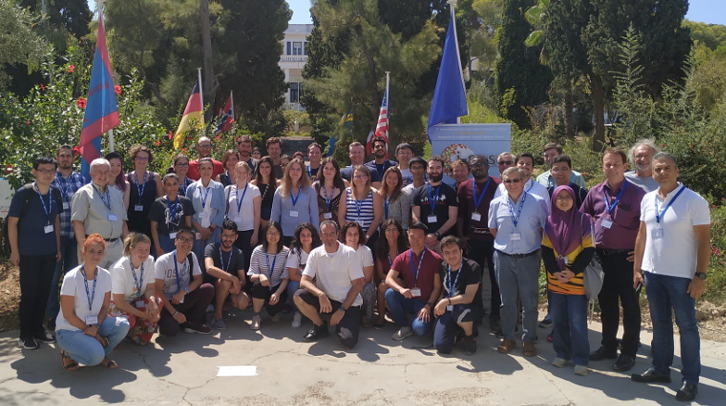 The week began with an introductory day. Theodore followed his welcome to the school (see below) with an introduction to ‘Physical Adsorption Forces’. Matthias then discussed the physical adsorption isotherm classifications. 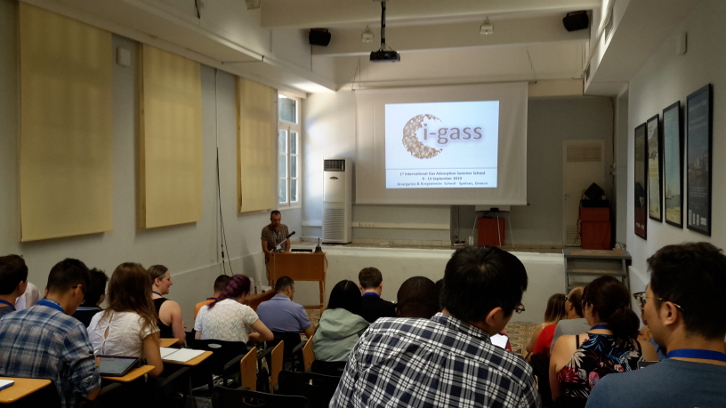 After lunch, Phil took us, firstly, through different porous solids – activated carbons, silicas, ordered mesoporous materials, clays, zeolites, and metal-organic frameworks (MOFs) – followed by the various applications of gas adsorption. The day finished with coverage of the characterization of materials using adsorption methods, by Kazu, and a discussion of isotherms – definitions, examples, equations and fitting – by Gino. 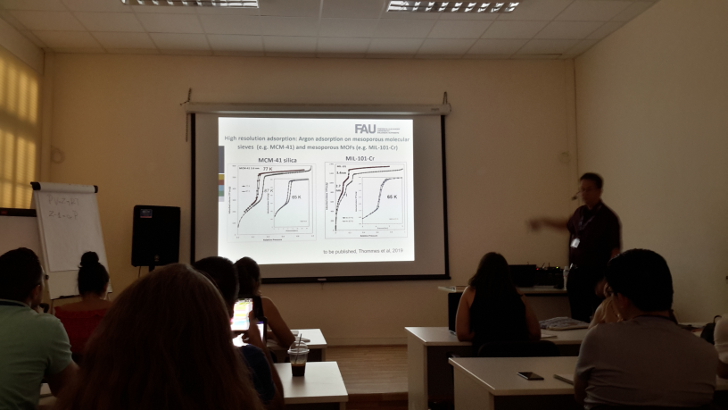 The summer school programme on Wednesday and Thursday then focused on characterizing the porous properties of materials using gas adsorption. Extensive coverage of both Grand Canonical Monte Carlo (GCMC) simulation and Density Functional Theory (DFT) was provided by Alex and Jacek, with Kazu covering the vast array of different classical methods, including t-plots, αs-plots, the Horvath-Kawazoe (HK) and Saito-Foley (SF) methods, and BJH (Barrett-Joyner-Halenda) analysis.

On Wednesday afternoon, some of the tutors and students headed off on a boat trip around Spetses, stopping at a beach on the other side of the island. A group photo from the trip, courtesy of Ramonna Kosheleva, is shown below; more photos can be found on the IGASS Twitter account (@igass2019). 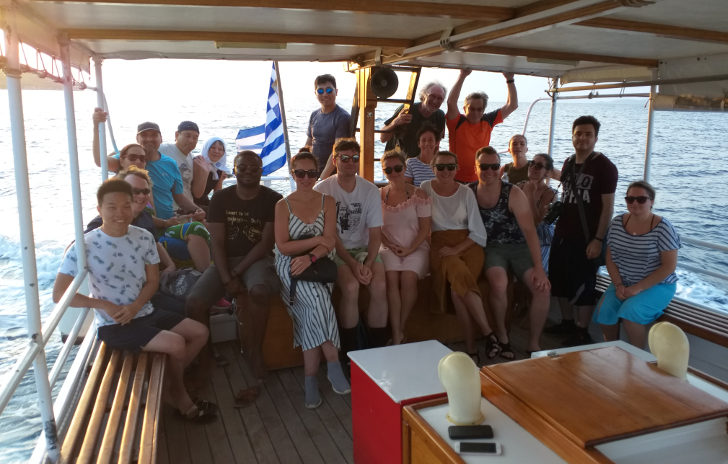 We’ve been talking a lot about adsorption this week, and it was time for a break. So a few of us went on a boat trip. We started out from the beach by the summer school venue… pic.twitter.com/NwDjZ8HwJH

On Friday – following the summer school dinner, which was held at a local restaurant on Thursday evening – we addressed both mixture adsorption and some special topics. Kazu began by discussing the in-situ characterization of porous materials using X-ray powder diffraction, while Gino presented a series of talks on breakthrough curve modeling, adsorption kinetics, Zero Length Column (ZLC) chromatography, and Pressure Swing Adsorption (PSA). Phil finished the talks for the day by discussing flexible frameworks and calorimetry.

This selection of more specialist topics nicely concluded the school, providing further information to the students on the more detailed analysis required for practical applications, as well as advanced methods that can be used to complement the more common manometric/volumetric and gravimetric techniques.

This first international school on gas adsorption was a great success, thanks both to the contributions of the sponsors, tutors and students, and the excellent organization provided by Theodore, Georgia Charalambopoulou, and their team from Demokritos. This success means a second school – hopefully the start of a series – is highly likely to be held in the future. We very much hope that IGASS will then become a regular fixture on the calendar of adsorption conferences and meetings.

You Might Also Like
Hiden Isochema is proud to support World Metrology Day 20th May 2014!
The gravimetric sorption technique is used to determine the amount and rate of the interaction of a gas or vapor with a material.