Ammonia and water solubility and diffusivity in ionic liquids

In “The First Thermodynamic and Kinetic Analysis of Ammonia in Imidazolium Based Ionic Liquids using a Gravimetric Microbalance” [1] the authors describe ammonia solubility measurements in three different ionic liquids, at four temperatures in the range 10 to 75 °C, at NH3­ pressures up to 7 bar. A XEMIS-001 gravimetric sorption analyzer, which was previously validated against benchmark results for CO2 solubility in a reference ionic liquid, was used for all measurements. Equilibrium vapor liquid equilibrium (VLE) results were correlated against equation of state and activity coefficient models, with excellent agreement. Fickian diffusion coefficients were extracted from the gravimetric kinetic data, which is recorded simultaneously with the equilibrium sorption data.

A few weeks earlier, the Shiflett group reported a comprehensive study of water solubility and diffusivity in several imidazolium based ionic liquids [2] using an IGAsorp. Initial results for water solubility in an ionic liquid previously studied by another group were used to validate the instrument and method, with close agreement. Water solubility measurements for three different imidazolium based ionic liquids, at several temperatures between 10 and 42 °C, are reported and the data compared with a non-random two liquid (NRTL) solution model. The equilibrium results were also used to determine the enthalpy of absorption for each system as a function of the water mole fraction. The gravimetric sorption kinetics were evaluated to determine water diffusivity in the ionic liquids. The measured time dependent data correlates well with models even for the longest equilibration times (in excess of 50 hours), demonstrating the excellent long term stability of the IGAsorp.

“The close agreement in the two methods confirms that … the IGAsorp is an accurate and reliable technique for measuring water sorption in ionic liquids.” 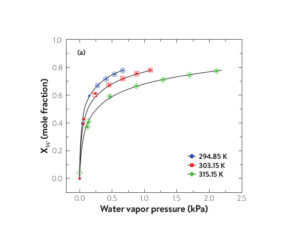 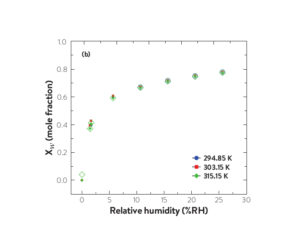 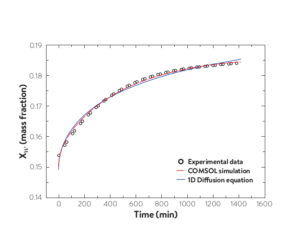 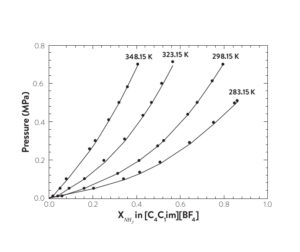 In the Journal of the American Chemical Society, Stylianou et al have reported on the investigation of the structural transformation of a Zn-based flexible