Measuring the hydrogen storage capacity of carbon nanotubes with XEMIS

Earlier this year the first XEMIS data in a peer-reviewed journal was published. The group of Prof. Robert Mokaya in the School of Chemistry, University of Nottingham (UK) reported a method of synthesising carbon nanotubes at lower temperatures than those typically employed in standard synthesis routes [1]. The authors then characterised the nanotubes using a range of analysis methods. A Hiden Isochema IGA-003 gas sorption analyzer was used to measure CO

The authors then characterised the nanotubes using a range of analysis methods. A Hiden Isochema IGA-003 gas sorption analyzer was used to measure CO2 and H2 adsorption isotherms at pressures to 20 bar at a number of different temperatures in order to evaluate the CO2 and H2 storage capacity of the nanotubes.

The hydrogen storage capacity of the most promising nanotube material was also measured at higher pressures up to 150 bar using a XEMIS instrument. Adsorption measurements were performed at 77 and 298 K with a 22 mg sample and this is reported in Figure 13 of the publication. Additionally, comparison of the data measured at 77 K on both XEMIS and IGA-003 instruments serves as a thorough validation of the XEMIS data, which the authors present in Figure S17 of the publication, which is reproduced below. It can be seen that both the shape of the isotherm and the magnitude of the uptake shows close agreement between the two instruments. 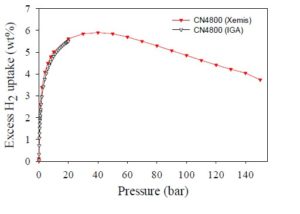 Excess hydrogen uptake data for carbon nanotube sample CN4800 at 77 K measured using both IGA-003 and XEMIS gravimetric sorption analzers. Reproduced from [1] with permission of The Royal Society of Chemistry. We thank the University of Nottingham for the plot.

March saw the successful installation of an advanced XEMIS sorption analyzer in Germany. This configuration includes an integrated dynamic sampling mass spectrometer and allows operation in both vacuum and dynamic modes over the full pressure and temperature range (vacuum to 200 bar and 77 K to 770 K). The system includes many accessories including a humidity generator for studying materials under both dry and humid conditions and as you would expect is fully automated and offers a high degree of flexibility. We have already received very positive feedback from the instrument users as they explore the XEMIS’s full range of measurement capability.

In our Applications Laboratory at Hiden Isochema headquarters we are continuing to produce demonstration data for customers, and we have also received new orders for multiple XEMIS systems already in 2015.

For more information or to request a quotation use our online contact form.

In the Journal of the American Chemical Society, Stylianou et al have reported on the investigation of the structural transformation of a Zn-based flexible